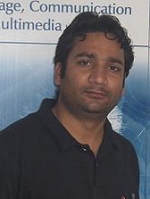 RAVINDER KUMAR received the Ph.D. degree in computer science and engineering from Thapar Institute of Engineering & Technology in 2015. He is currently an Assistant Professor with the Computer Science and Engineering Department, Thapar Institute of Engineering & Technology. He has already developed a complete working project on speech recognition and handwritten recognition for Indian regional language (Punjabi). His area of research includes theoretical and practical aspects of combinatorial optimization, approximation algorithm, and mathematical programming. He is the member of various professional bodies and serves as a Reviewer to many referred journals.

He is interested in theoretical and practical aspects of combinatorial optimization, approximation algorithm, design and analysis of algorithms and mathematical programming. I have already developed a complete working project on speech recognition for Indian regional language (Punjabi) and developed algorithm of end point detection. My research work includes algorithm on noise removing in hand written character.