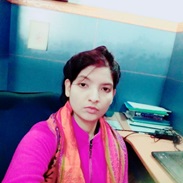 Swati Kumari is lecturer of Computer Science & Engineering Department , at Thapar Institute of Engineering & Technology Patiala. She has worked as an Assistant Professor at Jharkhand Rai University from july 2014- January 2017 & as a faculty associate from December 2013-july 2014.Has guided MCA & Btech students for their thesis work, has published 8 research papers in different International refereed journals & presented 4 research papers in different International Conferences & 2 research papers in different national conferences. She has worked as a lecturer at Cambridge Institute of Technology from December 2011- July 2012 & july 2013- December 2013. she has qualified gate in the year 2012.She has worked as a software developer at Wipro Technology, New Delhi from September 2010-november 2011.

Swati’s research interest are in quantum cryptography & compact coding. She has presented implementation of three stage protocol as a multi photon tolerant protocol & also presented a powerful algorithm to further enhance the security of the three stage protocol. Her ongoing research presents a new encryption scheme called Compact Coding that encodes information in time, phase, and intensity domains, simultaneously. The proposed scheme brings to bear for the first time their strengths simultaneously leading to an increase in the secure information transfer rate. The proposed scheme is applicable to both optical fibers and free space optics, and can be considered as an alternative to polarization coding. It applies the proposed compact coding scheme to multi-photon tolerant quantum protocols in order to produce quantum-level security during information transfer. She has presented the structure of the proposed coding scheme in a multi-photon environment and address its operation.